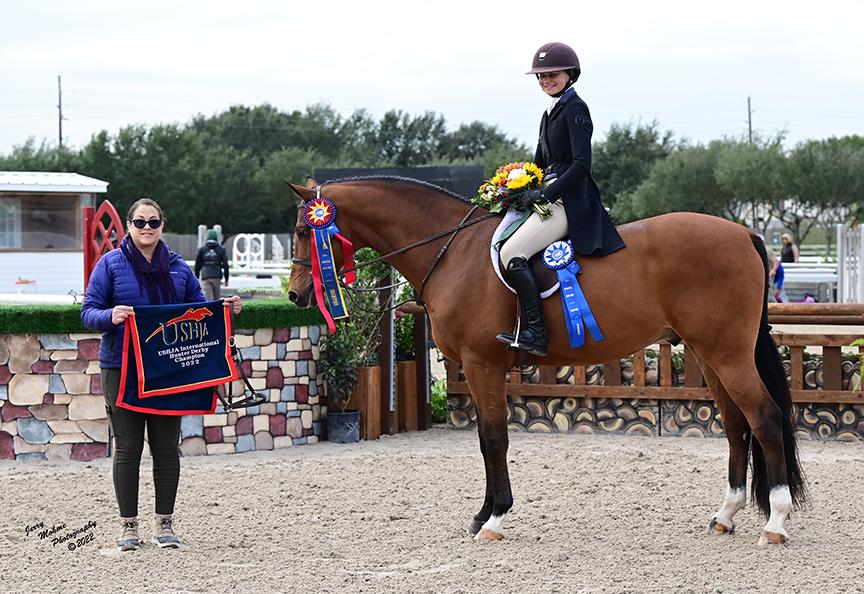 A field of 18 horses contested the first round of the week’s highlight hunter class, and at the opening round’s conclusion, Van Nortwick and MTM Post Script sat in third place with scores 85.5 and 90 for a 172.5 first-round total score. Holding the lead with a score of 178 was Jef Lauwers on Hallpass, and Lauwers also sat in second place with a score of 175 aboard Reba.

With the top 12 entries returning in reverse order of their standings for the handy phase, Nortwick and MTM Post Script’s second-round score of 200 instantly shot them to the top of the leaderboard with a 375.5 overall total. A handy round score of 196 would give Lauwers and Hallpass, owned by Sue Copeland, a 374 total for a close second place. Lauwers and Reba, owned by Shadyside Farm, finished in third with a score of 362.

Van Nortwick has spent the past few years working for Will Roberts at Pine Hollow Farm in New Caney, TX, and Roberts was highly complimentary of Van Nortwick and MTM Post Script’s performance and partnership.

“Morgan works really, really hard, and I love working with her,” said Roberts. “I do greatly appreciate that. She’s a pleasure to be around, and the horses love her.”

MTM Post Script came into the barn in August as a sales horse, and Van Nortwick and the 10-year-old Warmblood gelding, owned by Cecilia Halsey, have meshed well in the few months since then.

“Much like almost every horse, he loves Morgan,” said Roberts. “Horses love her. They go out of their way to try hard and be good sports for her.  He went really exactly the way that we wanted him to in both rounds.”

Roberts continued, “We kind of geared him toward this class. So, we showed him lightly the past couple weeks and then chose not to show him during the week this week just to target the derby, and when it works out like that, everybody’s happy!”